I’ve just returned home from four days in Houston at International Quilt Market and will be writing a series of blogs on this topic. The scale of this event, which is a trade show at which quilt store owners purchase from manufacturers and distributors, is massive. The George Brown Convention Center is a vast building, complete with a row of Porta Potties! Fortunately, the latter were for use by people attending events in the park in front of the Convention Center and not for us! Upstairs in the Center there are round windows like port holes so you can look down on all the booths. There were 24 aisles each with as many as 30 booths. 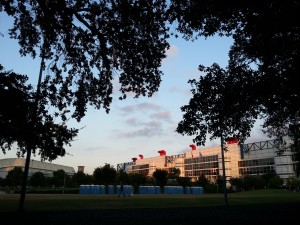 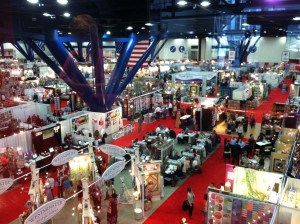 The day before Market opened, retailers and exhibitors could go to Schoolhouse presentations on new products and techniques. 12 to 15 sessions were running simultaneously. Most sessions were 30 minutes. This went on for eight hours and it was hard to choose which ones to attend. I was one of the presenters, sponsored by QuiltWoman.com, and introduced my template-free Kaleidoscope technique. About 80 people came which was good considering the timing late in the afternoon, and it was well received. 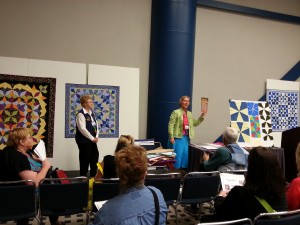 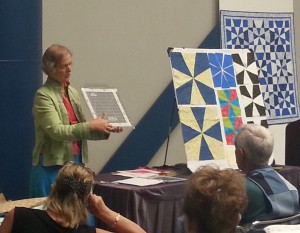 My good friend Nancy Watts came to Market with me and was my Vanna, holding up quilts for me during my talk. Nancy also helped us set up the QuiltWoman.com booth where I worked doing demos every morning of Market. QuiltWoman.com is marketing my patterns and company owner Nancy Dill invited me to be there promoting them. Nancy D and her friend Delores Joshua ran the booth and we had fun working there and relaxing with them for dinner each evening after the exhibits closed. Here’s the booth with me at my demo station and a picture of me with the two Nancys. 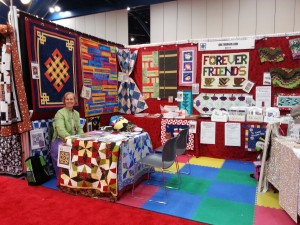 We were on sensory over for four days! There was so much to see and it was extremely inspiring. In addition to the 700+ booths, we also had access to the International Quilt Association judged show and numerous special exhibits with incredible quilts to be opened to the public at Quilt Festival following Market. During Market everyone is so busy at the booths, that the quilt exhibits are wide open with no crowds. As exhibitors, we were able to go in early in the morning so grab some additional time there. I’ll post more on the booths, show and special exhibits in subsequent blogs.