I’ve just returned home after a wonderful month in South Africa, beginning with the 17th National South African Quilt Festival in Bloemfontein. I’ll be writing several blogs about the Festival, where I taught for all six days, made many new quilting friends and enjoyed the outstanding hospitality of the Oranje Kwiltersgilde. The South African Quilters’ Guild hold these Festivals every other year. The location rotates around the country and the event is hosted by the local guilds in the area. Bloemfontein is fairly centrally located in the country, in the Free State about four and a half hours drive southwest of Johannesburg. Festival was held at Eunice High School, while the high school kids were on their winter break and accommodation was at their hostel. I was given a VIP apartment, (rather than the dormitory), with my own little kitchen and bathroom which was very nice. 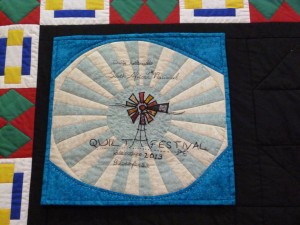 The beautiful banner has panels from all 16 of the previous locations of the Quilt Festival. Bloemfontein is the 17th Festival so is the first one on a second banner. The theme of the Festival was Kaleidoscope. They used the motif of a windmill to represent this and decorated beautifully with windmills and Kaleidoscope quilts. This area is farmland and these windmills are all over the place, pumping water for the animals, so it was the perfect theme choice. 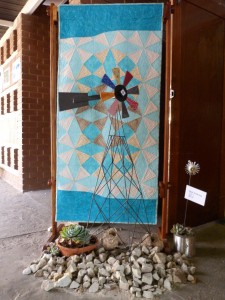 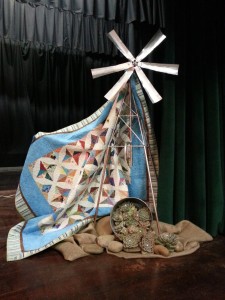 At Quilt Festival there were over 20 teachers and as many as 15 workshops running simultaneously on each of the six days. Some teachers just taught one or two classes and others, like me, had a busier schedule. In addition to the classes, there were lectures during the lunch break, (I did two), a wonderful quilt show and a good variety of vendors. We also had three evening events – a welcome dinner where the teachers were introduced, an awards dinner to celebrate the winning quilts in the show and a wrap-up farewell dinner. Each was catered beautifully and the traditional Afrikaans food was outstanding. At every dinner table there was a lovely center piece continuing this windmill/Kaleidoscope theme. The large glass contained a windmill with rocks and succulent plants, and stood on a Kaleidoscope quilt table runner. 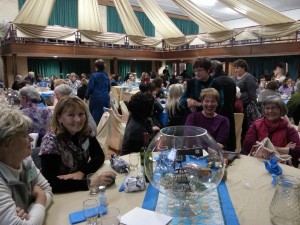 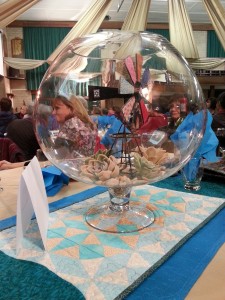 This area is very Afrikaans and for many of the Quilt Festival Committee, Afrikaans was their first language. Iessie Steenberg, the Chairlady, joked about her difficulty with English, but she was actually very proficient. Much to my embarrassment, she announced to the assembled masses that all the proceedings were in English for my benefit! At the closing farewell, she was quite emotional when thanking her Committee and quipped, “I can cry in English!” Here I am with Iessie, who looked after us so well and we all loved her. I told her, “I can laugh in Afrikaans!”. 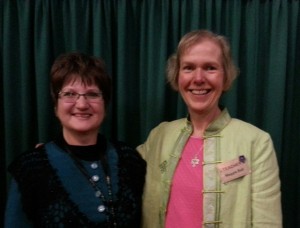