In May, I taught in Santa Rosa at two quilt guilds and stayed in the lovely home of quilter Janet Tonkin. Several years ago, Janet purchased a Navajo hand woven rug at the Hurbell Trading Post in Ganado, AZ. The 20″ x 30″ rug was woven on a loom by Lenora Davis and the style is Two Grey Hills. Janet has it displayed on a wall in her home. This rug inspired her to design a quilt using the rug pattern as a guide. She was able to break the pattern down into squares and rectangles to piece this beautiful replica. Here are the quilt and rug side-by-side. 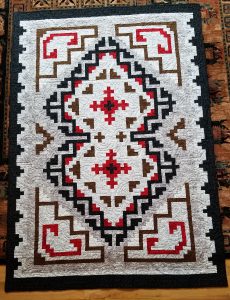 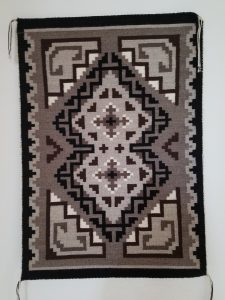 As you can see, Janet added red to her quilt and used grey tones rather than the browner tones in the rug. The quilt is about twice the size of the rug. Janet has it folded over the back of a grey couch in her living room where it is a pleasing addition to the decor and can be used as a large lap-quilt on cold evenings.