In mid-May, I taught at two quilt guilds in Santa Rosa. My host was a guild member, Janet Tonkin. Janet took me to see a small exhibit of her quilts at her local church. The Moonlight Quilters of Sonoma County has a quilt show coming up and the theme for their challenge this year is fire, in light of the horrendous wildfires that swept through Sonoma County last fall . Here is the quilt that Janet made, Sonoma Strong, approximately 24″ x 24″. 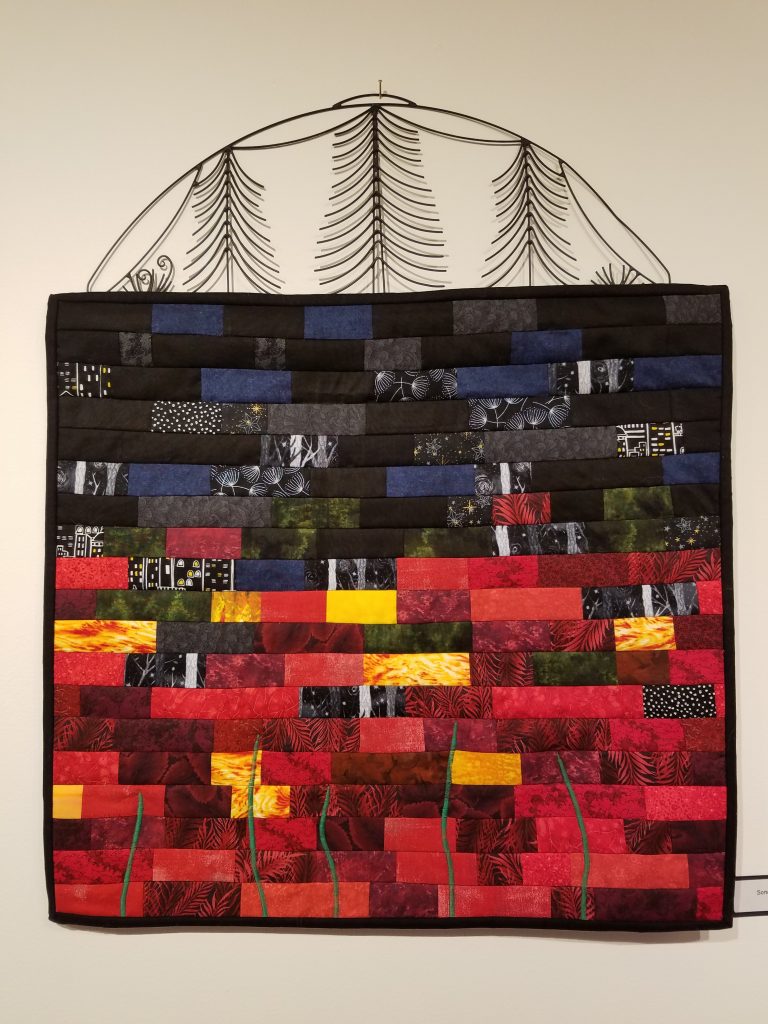 Janet’s small quilt conveys the all consuming power of the fire and the destruction it caused. The black tree hanger is a perfect complement. In Santa Rosa, over 5,000 houses were destroyed by the fire and the impact on the whole community is immense. There are entire neighborhoods that were wiped out. The rubble has been removed and the lots now stand flat and bare. Re-building is not happening very quickly. Many people have moved away, or are still fighting their insurance companies to receive their claims. The hillsides have charred trees, several of which have survived and have small green areas on the tops and shoots sprouting away at the base of their trunks. The undergrowth is coming back with lush green grass and wild flowers. In the Santa Rosa Quilt Guild, 17 guild members, “Cinder Sisters”, lost their homes and other guild members have reached out to help them. 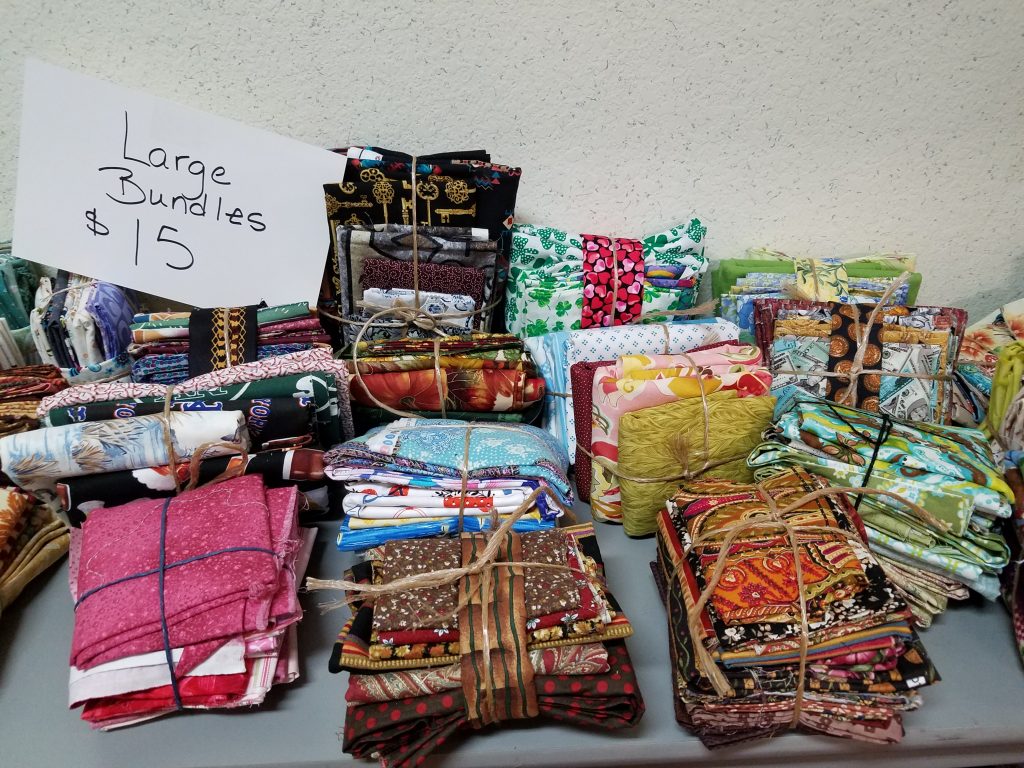 At the Guild meetings, these bundles of fabric are free for the “Cinder Sisters”. Other guild members may purchase them and the money goes to the fire victims to help them replace their quilting tools and anything else that they need. A teacher who had recently taught at the guild just before the fires, was teaching at a Texas guild and suggested a fat-quarter drive for the fire victims. Word spread quickly after there was a post on the “Quilt Along with Pat Sloan” Facebook page. 908 packages arrived from 80 quilt guilds around the nation, donors from 49 of the 50 states, and from overseas (Australia, Canada, England, Germany, Mexico, and Scotland). Someone in the guild had a new shed which was used to house and sort all the fabric and guild members put together the bundles. The amount received was enough to fill 30 pick-up trucks! 178 finished quilts and 52 tops were also received; 124 of those quilts have been distributed to fire victims. Even after the request for donations to stop, more kept coming but are now down to a trickle. This demonstrates, once again, that quilters are big-hearted and very generous.

One of the many aspects I love about teaching, is being introduced to useful quilting “stuff” by my students. A lady in my class for the Metropolitan Patchwork Society in Beaverton, OR, had this great little travel case for storing quilting tools. It is supported by a plastic display rack, approximately 8″ x 6.5″. The purple cover flap is hanging down the back and flips over to close the case with the velcro strip. This is so handy for all the small tools and gadgets that quilters like to carry and have at their disposal. 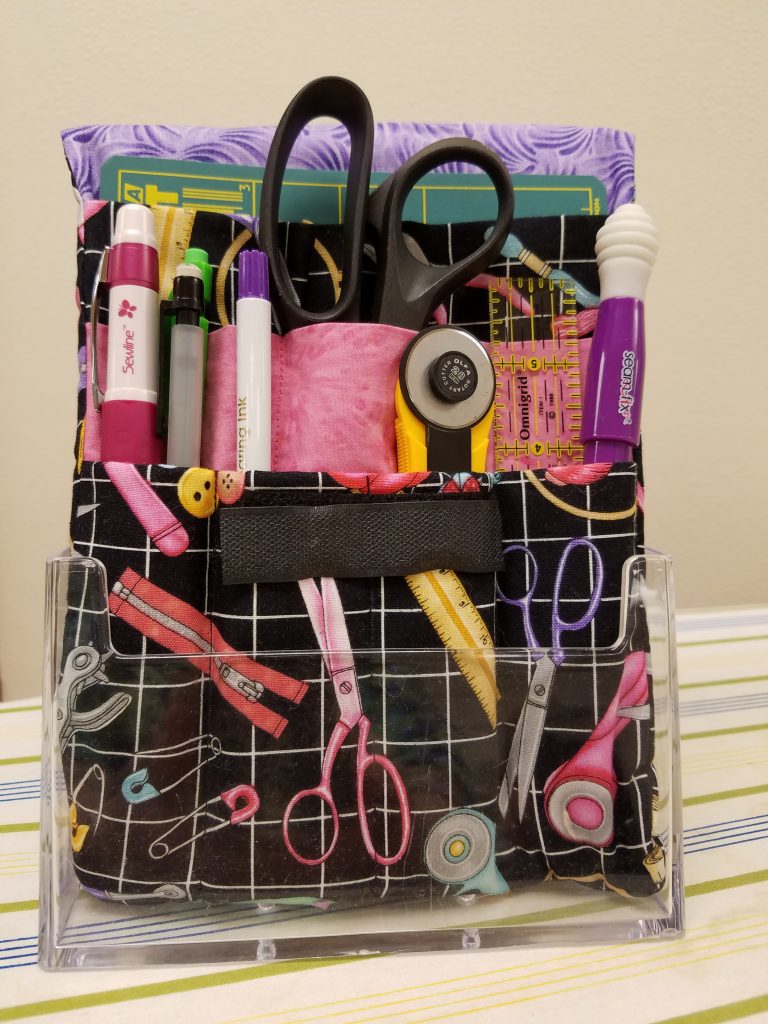 This nifty travel case was designed by Pearl Pereira and the pattern is available for purchase at her on-line store.

I recently taught my Gateway to Mongolia class at the Metropolitan Patchwork Society in Beaverton, OR. The pattern is available from my on-line store. Here is what one of my students made. This beautiful Ölzii is made from one fabric. 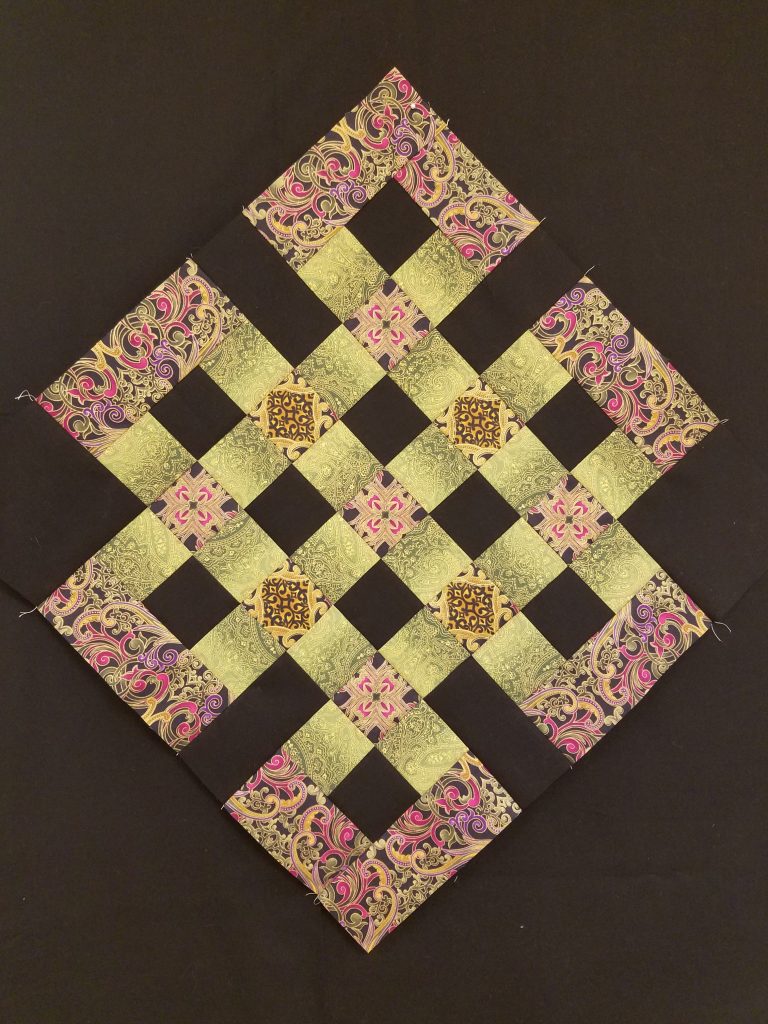 When I first saw the fabric choice that this student brought to class, I wasn’t sure how the fabrics would work together. However, she was able to fussy-cut from selected areas of one fabric to create the desired effect and it is very successful. She used motifs in the pattern for the intersecting squares of the Ölzii design and sections of fabric that changed from lighter to darker green instead three different fabrics for a color gradation. The fabric in the outer edges of the Ölzii also came from this fabric. It really pops on the black background and we were delighted with the results. Here are another two, one on a light background and the other on a dark background. Both students did a fine job on achieving the woven effect with a good gradation of colors. 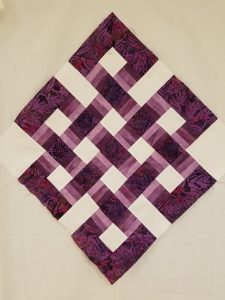 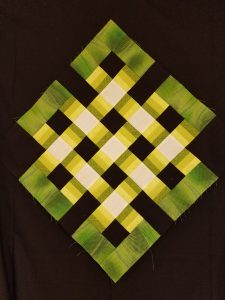 While I was in the Portland area to teach in Beaverton, I visited my good friend Nancy Watts, who has worked with me assisting the Mongolian Quilting Center for several years. Nancy had just returned from a Silk Road tour to Uzbekistan and shared her stories. She purchased this amazing suzani at an antique shop in Bukhara. It is at least 100 years old, woven in strips and hand embroidered with silk thread in intricate designs. 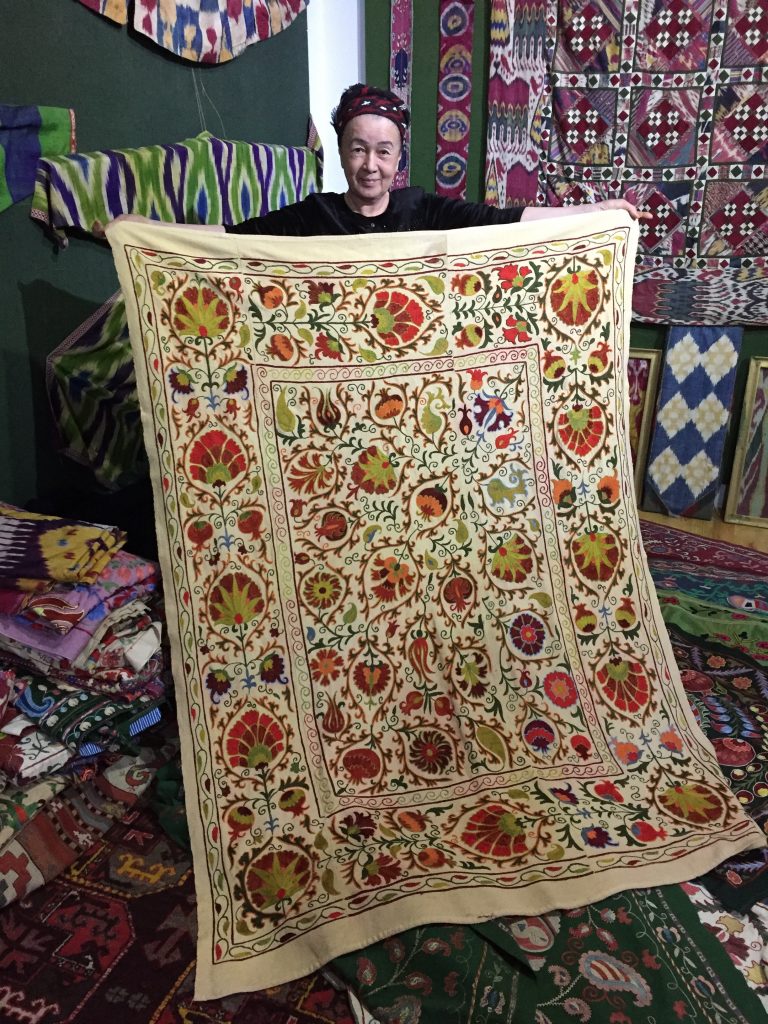 Traditionally, brides make these for their husbands. They are used in their yurts as wall hangings, bed coverings, or covers for belongings. The beautiful embroidered motifs all have symbolic significance and meaning: the pomegranate for festivity, peppers to protect from evil spirits, wavy stems for wealth and vitality, tear drops and almonds for abundance, and flowers which are the paradise garden in the desert to bring luck, good health and longevity. 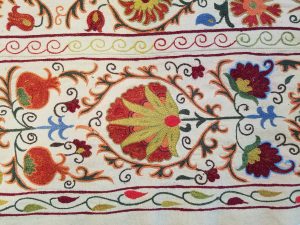 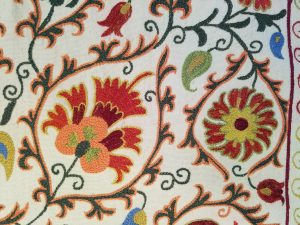