I was fortunate to attend an extraordinary art exhibit at the Seattle Art Museum in early September. This was hugely popular and my first attempt to get in failed after I queued for two and a half hours and it was sold out. On my second attempt, I went with a friend who had a membership for two at the museum and we were fast tracked to the ticket booth and given a time to attend later in the day. The exhibit, with works dating from 1965-2017, Infinity Mirrors, by Yayoi Kusama, a Japanese artist, was unlike anything I’d seen before. There were six small rooms to enter, just two people at a time, for 20-30 seconds. In these rooms were objects, for example yellow pumpkins with black spots, pink balls with black spots, colored lights, and a series of mirrors to make the objects or lights repeat themselves giving the illusion of infinitely. It was amazing and mind-boggling. The first picture shows my favorite, the Infinity Mirrored Room – Love Forever. There were two peep-holes to look into the room and the lights constantly changed colors. The center mirror shows my hands holding my cell phone to take the picture. 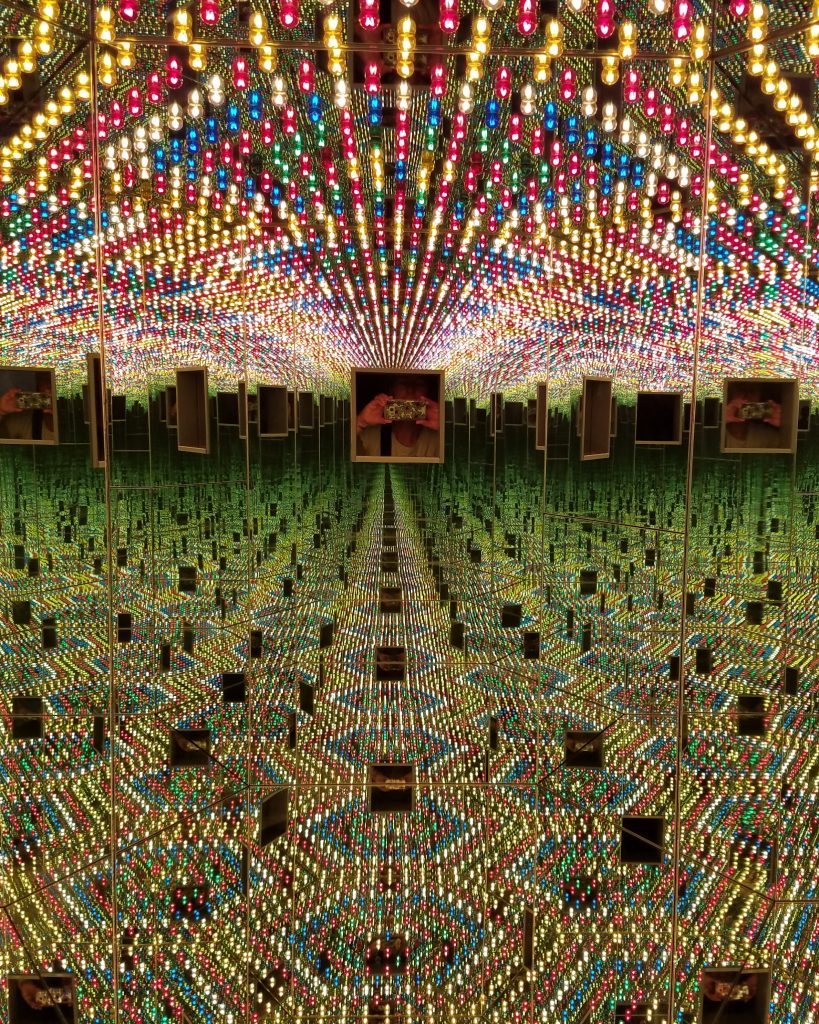 Dots Obsession – Love Transformed into Dots was multiple pink balls covered in black dots. The picture on the left shows the outside and the one on the right, is inside the largest ball with the mirrors and infinity effect. 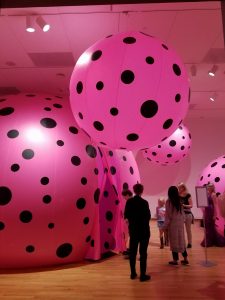 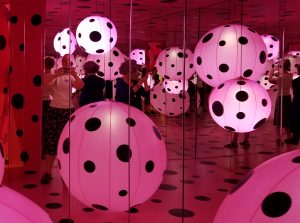 Yayoi Kusama is indeed obsessed by dots. Infinity Mirror Room – Phalli’s Field, consists of  white stuffed fabric tubers covered in red dots. The other picture shows me in The Obliteration Room, an interactive environment where everyone was given three colored dots to stick anywhere in this room that was originally totally white. Since I attended the exhibit close to its closing after it had been running for three months, it was hard to find a space that was still white and not covered in colored dots. 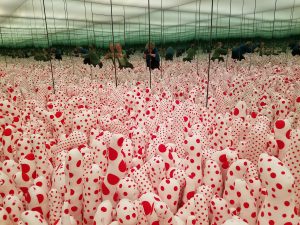 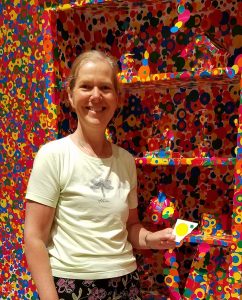 Here are a couple of shots of sculptures by this incredible artist. Notice the use of dots again! 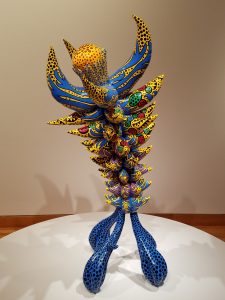 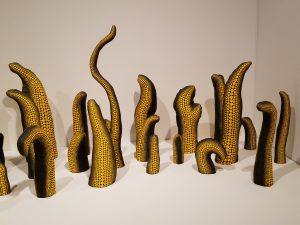 The next pictures are snaps I took during a video of the artist talking about her work. I love what she says: “I take each day as a test for how much I can contribute to society and increase peace and love around the world” and “I’m always thinking about how I can make something that people will enjoy and be moved by.” I found this exhibit so inspiring and creative. The bold use of dots, bright colors and lights, and the illusion of space generated by the use of the mirrors were fantastic. 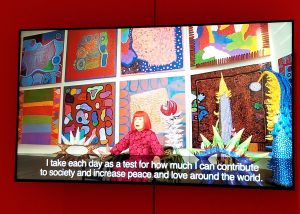 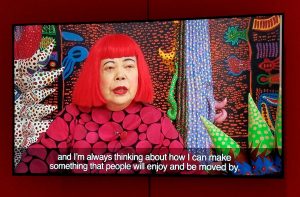 I’m continuing from last week when I wrote about the exhibition of quilts in the barn at Cowslip Workshops, near Launceston in Cornwall, UK. The featured quilt today warrants a blog on its own so that you can enjoy the detailed photographs of this stunning piece. Quilters were invited to participate in a challenge themed around a view through a window. Kay Vanstowe depicted her own house and garden with colorful flowers and figures in the window observing the view. This quilt, (actually a pair of quilts), is entitled Raffi and his Grandad Looking Through the Window at Coombe: The Effects of Light On and Through Windows. 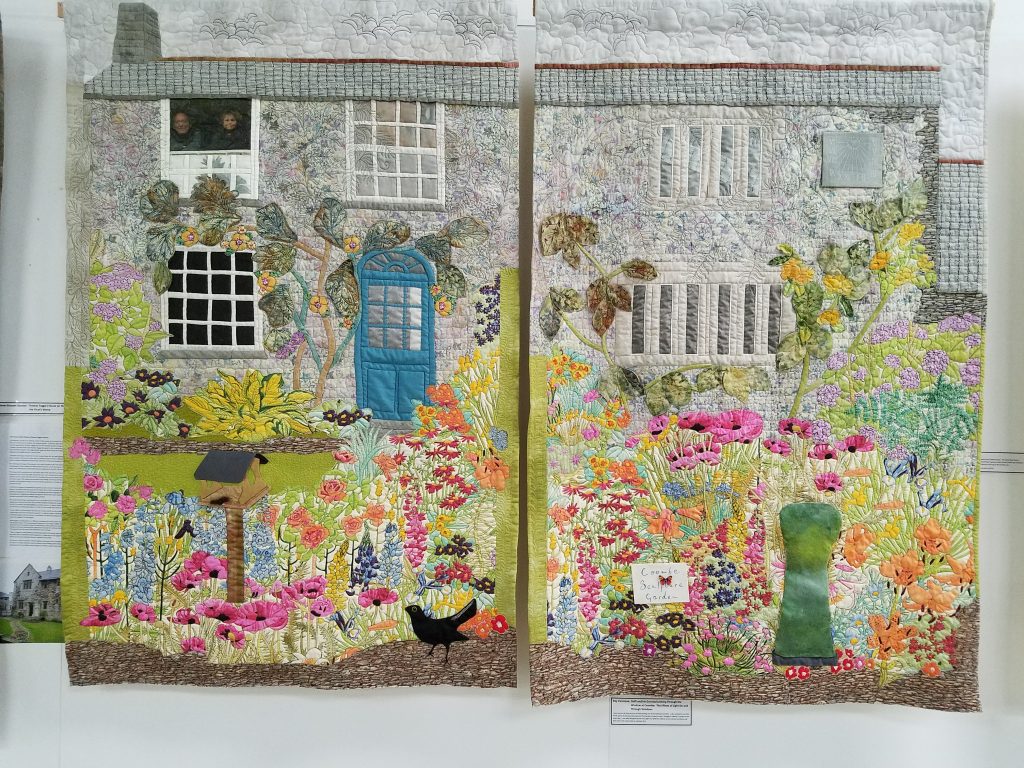 Kay writes, “I was inspired by this picture of Raffi looking out of the bedroom window. I also wanted to use this lovely piece of Liberty print material (The Garden Flowers) which I bought in Liberty’s, London a few years ago. I was also intrigued by the way the light had different effects on the various windows and glass door and I have tried to replicate this.” Check out the detailed shots to see the intricacies and how the quilting helps to pop highlight all the beautiful floors. I love the blackbird and birdhouse too! This is a charming work of art. 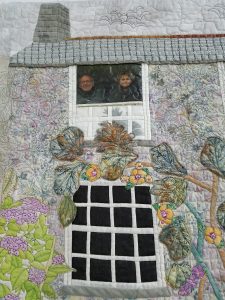 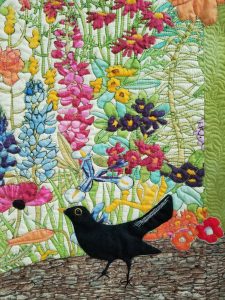 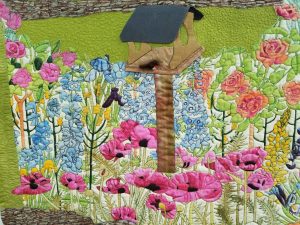 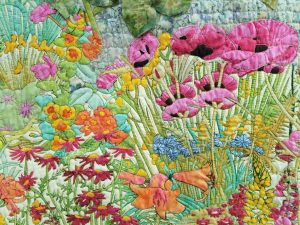 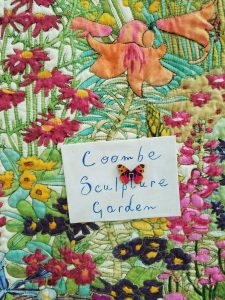 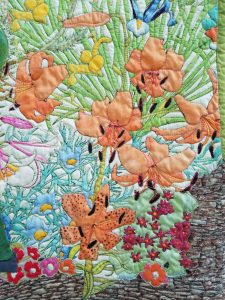 See my blogs from the last two weeks for more on the quilt shop, cafe and classes at Cowslip Workshops. Store owner Jo Colwill recently appropriated one of the large barns at the farm to use as an exhibition space for quilt shows. The inside is freshly painted and the walls were adorned with quilts made by Jo, local teachers and students. Most of Jo’s quilts are quilted by long-arm machine quilter, Sandy Chandler. Quilters in the area were invited to participate in a challenge themed around a view from a window. Some of these quilts will be highlighted in detail in my next two blogs. Here’s a sampling from this barn quilt show. 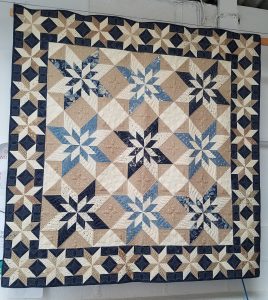 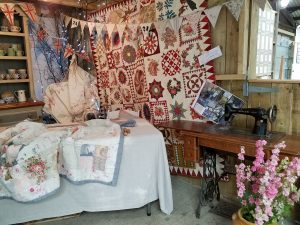 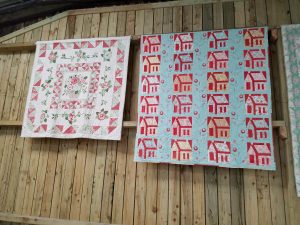 The row of the pictorial quilts are part of the View from a Window exhibit. The others above were all made by Jo. 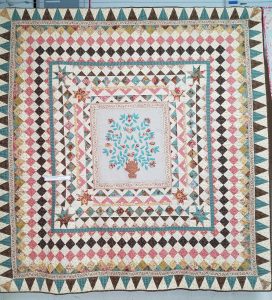 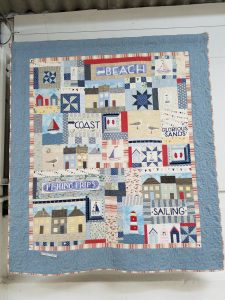 The lovely antique-style medallion quilt, Cowslip Perrencombe, was machine pieced and hand appliqued by Anne Payne and machine quilted by Sandy Chandler. The pieced borders add so much to set off the delicate tree in the center. The quilt on the right is a delightful summery beach sampler made by teacher, Helen Brookham as a workshop sample.

Do visit Cowslip Workshops if you are in the Launceston area, (Cornwall, UK).

Last week’s blog introduced you to Cowslip Workshops, a wonderful quilting destination near Launceston in Cornwall, UK. There is a delightful quilting store and a cafe (see last blog). Here I highlight the classroom and the beautiful quilt hanging on the classroom wall. A variety of classes are offered throughout the year including patchwork and quilting, felting, knitting, embroidery, and willow animal sculptures. Usually the maximum number of students is eight to allow enough space for everyone and plenty of individual attention. Jo Colwill, the store owner, teaches many of the patchwork classes and also brings in regional and national teachers. Jo is on the right in the photo in a second, smaller classroom with a student. Here she demos the Bernina sewing machines that she sells. 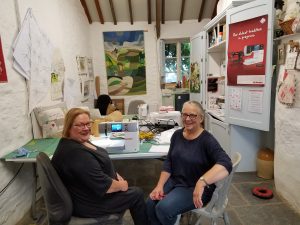 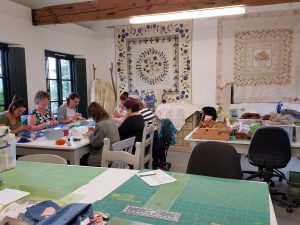 The beautiful quilt hanging on the back wall of the classroom was made by Jo and she regards it as one of her best works. The applique and hand quilting are exquisite on this gorgeous piece. Here’s a full frontal and a couple of close-ups. 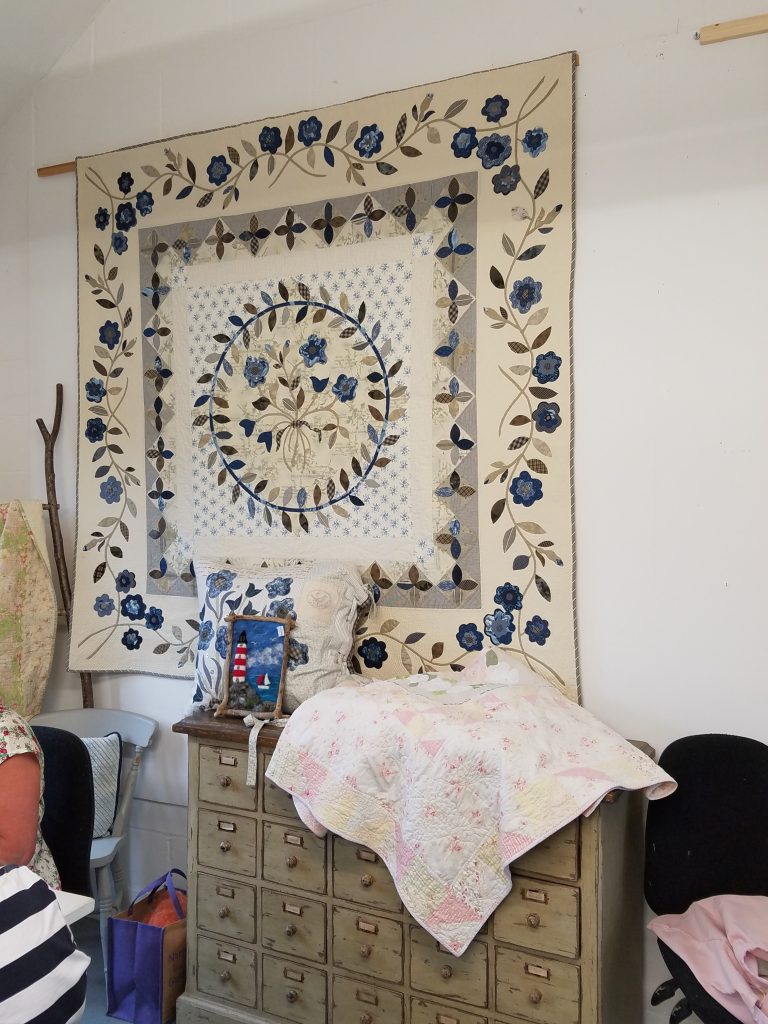 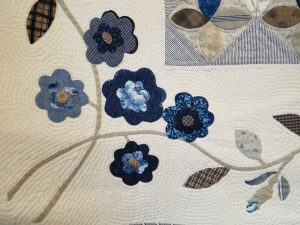 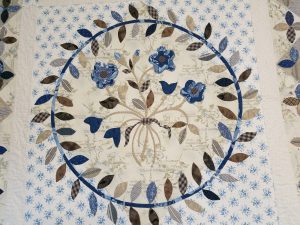